Last week I shared The Returned, the French version, in what Kim and I have been watching. This week, I share another show we’ve been enjoying from across the pond: The Royle Family, a British comedy from the early 2000s. 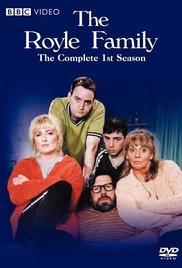 I think Kim mentioned this show a few months ago as a friend on Facebook asked her if she had ever seen it. At the time, it wasn’t available on Netflix. However, this month, it became available on Netflix so we decided to give it a try and so far, at the end of Season 1, we are glad we did. Like several British shows, it takes a few episodes for the show to hit its stride and when it doesn’t, it doesn’t let up on the poignancy of relationships among the family members and especially between the daughter Denise and her boyfriend Dave. The two actors, the late Caroline Aherne (who passed away last year) and Craig Cash, who portrayed them also were writers for the show, which makes it all the better.

The show, at least in its first season, all that we have seen so far, takes place mostly in the living room of the family and the conversations they have in between watching TV programmes. The first couple shows you might think so this is it? But then it delves into what’s beneath the surface, which isn’t all happy happy joy joy, but is all real real real real or based on real real real real, and in those moments the show shines.

I couldn’t find any good clips from the first season on Youtube that really capture how good the show is, but I did find this clip from Season 3 that gives you a taste of the humor:

What have you been watching lately that you’d recommend?