Have you been using your library over the past month? What did you read? What didn’t you read? What are you waiting on? The linky goes up the last Monday of every month, and will stay open through the 15th, so click the button at left to go to Charleen’s post for this month to add your Library Checkout post to the linky there.

I was planning to read more Hiaasen and also fellow Floridian Tim Dorsey, but then decided I just couldn’t do it as you can see below. As for the Nesbø books, I decided to re-try them after a patron said they were really good. I like Nesbø, but these didn’t grab me when they first came out.

Since I haven’t finished Midnight Sun as of this draft, out of the three, I’ll say that my favorite of the three was Blood on Snow. I also enjoyed Nesbø’s short stand-alone novel Headhunters and the movie on which it was based.

Yes, I like Nesbø, as noted above, but I’m having a hard time focusing right now and the promise of multiple stories in the synopses I’ve seen didn’t appeal to me this month. I’m sure I’ll read it eventually, but just not in the near future. I skimmed the cat book, but was lukewarm about it and the second Nero Wolfe, I just wasn’t in the mood for at the moment.

Nada except for Midnight Sun, if I haven’t finished it by the time you read this.

What did you check out from the library this past month, put on hold, return unread, did not finish? Click on the button above to go to Charleen’s post to add your own post, or comment there — and here, if you’d like. 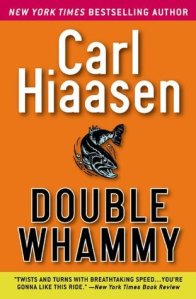 I don’t know what it is, but for the first part of this month, nothing has been grabbing me reading-wise. I had the second Nero Wolfe mystery, The League of Frightened Men, by Rex Stout out on ebook from Overdrive from the Free Library of Philadelphia since the end of last month, but for some reason, I just didn’t pick it up to read. I have the second Inspector Rebus, Hide & Seek, by Ian Rankin on hold, also on ebook at FLP, but it seems to be taking forever for it to come in. Finally, I decided to retry the one at left.

I’ve wanted to read Hiaasen for a while after hearing his name in connection with fellow Floridian authors and also journalists Dave Barry (The Miami Herald) and Tim Dorsey (The Tampa-Bay Tribune), both of whom I’ve read a little of and enjoyed. I stopped this one at the time, because I wasn’t in the mood for the silliness, but yesterday, I thought I’d try it again — and I’m glad I did. I read it yesterday afternoon as it became the first book I finished this month. Now based on this one, I’ve picked up the second one in the series, Native Tongue. I also checked out the fifth in Dorsey’s Serge Storms series, The Stingray Shuffle, when I checked out Double Whammy. Maybe I’m thinking of Florida because the weather here later this week is supposed to go up to the high 80s (Fahrenheit), which is unusual for us in northcentral Pennsylvania in May. I don’t know.

Other than reading, I’m continuing to work at the library and my wife Kim and I are watching various shows on Netflix, which we’re writing a series about on the Wednesdays of this month. The first Wednesday, I shared my favorite Netflix shows; this past Wednesday, Kim shared her favorite shows on Netflix; and this coming Wednesday, we share our favorite Netflix shows. Then on the last two Wednesdays, I’ll share my favorite Amazon shows and Kim will share hers. Semi-spoiler: One of our favorite Netflix shows is Master of None, and on Friday, the second season came out and we binge-watched the first eight episodes Friday night, then finished the last two episodes last night. It was/is the perfect binge-watching show (I think we did the same with the first season) and even as I’m drafting this Saturday night, I’m listening to a playlist on Google Play Music of songs from the second season.

I’ll leave you with this playlist I found on YouTube of music from the second season:

How has your reading been going so far this month? Any you’d recommend to others? Watching or listening to anything good? Share in the comments.